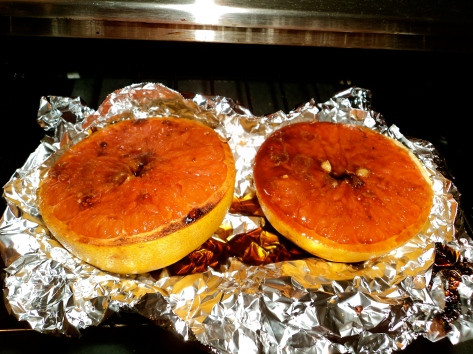 Lately I’ve seen a lot of posts on Pinterest and other websites for recipes for broiled grapefruit. Apparently broiling grapefruit is not a new thing, but I had never thought of doing it. I love grapefruit, and eat it often. I usually peel it like an orange and eat it that way. But I was curious to see how I’d like it broiled.

And it is a super easy recipe!

There were a few recipes I saw for broiled grapefruit, and they are all pretty much the same.  The one that stood out to me though, was Running with Tweezer’s version for “Rosewater Broiled Grapefruit.”  Rosewater anything is good to me.

From Running with Tweezers:

2. Cut your grapefruit in half.

Meditate on it for a bit.

3. Get out your rosewater and brown sugar.

I used jaggery, as I really like the taste and I had a bit on had, leftover from my horrible puran poli.  Jaggery is very very unrefined sugar, and like brown sugar, it contains molasses.

4. Cover the grapefruit halves with rosewater, sprinkle with sugar.

Also you might want to use a toaster oven or a regular oven for this, they both work.  I used a toaster oven, and so I wasn’t able to used a sheet pan.  I ended up just using some foil to create a little makeshift tray.

Preheat broiler to about 350 degrees.  When the oven is warm pop in your grapefruit in the middle rack. 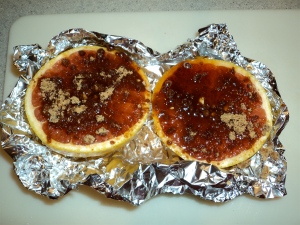 You will want to keep a close eye on your fruit, as the sugar can quickly burn after a certain point.

If you are using a regular oven, I would suggest keep the oven light on.  As I was using a toaster oven, it was easy to just look in on them from time to time.

The recipe I was following said to keep them in 3-5 minutes, or until the sugar starts to bubble.  I ended up keeping mine in for closer to 8 min.

Overall I would say that this is a nice way to eat grapefruit, but adding the extra sugar (on top of the grapefruit’s natural sugars) seems like a way to turn a healthy snack into a less healthy snack.  It also takes longer to broil a grapefruit then to just eat it as it is.  And it makes more of a mess.

While these were ok, I did not love them.  I doubt I will bother broiling a grapefruit again, though I am happy I tried it once.

One thought on “Broiled Grapefruit”